Invisible Architecture in the Maastunnel

This version of the project ‘Invisible Architecture’ took place in the Maastunnel, Rotterdam (Netherlands, September 2015 – June 2016), investigating the acoustic qualities of this monumental tunnel. The Maastunnel is 500 meter long and is situated under the Maas river, connecting the North and the South of the city. Its architecture was explored through different experiences and ways of listening, such as: by doing sound-walks, performative interventions, and by recording sounds that are (in)audible to human ears –using a contact microphone, electromagnetic field sensors, ambient microphones, and hydrophones. This research resulted in a workshop and an audiovisual presentation. A sound and video publication, entitled ‘I.A. Maastunnel’ is currently in the process of production.

Review by Patrícia Pinheiro de Sousa, 12.09.2015:
”As a frequent user of the Maastunnel I often wished having a sound recorder with me. Sometimes the staircases seem to ‘dj’ a strange combination of mechanical sounds, sometimes someone sings in the bicycle tunnel along with a faulty bicycle chain, sometimes, someone replies to someone’s ‘Ohh’. The Maastunnel invokes sound interaction.

The ‘Invisible Architecture’ workshop allowed me to enter this soundscape through various entrance points. As an active listener during the blindfold walk for instance, and as a direct intervenient, producing sounds with objects and my own voice. Janneke and Chrs guided us through this amazing experience in a very intelligent way, allowing us to enter and conquering the space of the Maastunnel gradually through sound. They were both very attentive and able to share their knowledge and experience, giving the participants enough space for self-expression and exploration within the framework of the different exercises.” 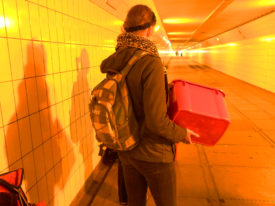 > Workshop at the Maastunnel and at Wolfart Project Space on 12 September 2015
> Link folder
> Presentation video ‘I.A. Maastunnel’ at Charlois Speciaal Festival, Maastunnel garage, on 13 June 2016
> Supported by Rotterdam City Council and the Mya-Fund of Stiching NAC
> Download the portfolio of ‘Invisible Architecture’
> Website of Chrs Galarreta