“Now the earth was formless and empty and darkness was over the surface of the watery depths.”
(Genesis 1:2)

It’s around midnight at DAMAS, Lisbon, when Janneke van der Putten (NL, 1985) wearing a white lace mask approaches the audience in the first room. She is standing tall before the expectant faces and in her hands there is a metal bowl filled with hot water, black and white stones, and a hand mirror. She has a solemn presence and the feeling in the room is that something is about to happen. Something rather special.

She asks people to come near, inviting them to pick up two stones each, and to come with her. They do just that, following her into a pitch black corridor, slowly paced and while clapping stones – some of them clumsy, some of them assured, some fighting the dark holding their eyes wide open, some merging with it closing them briefly while walking. All these minuscule gestures happen while Janneke murmurs rather melodically the beginning of her rendition of Echo’s myth: “Killing Echo”.

‘Narcissus and Echo’ is one of the myths of love, loss and miscommunication that the artist sings. Echo falls in love with Narcissus as soon as she sees him, but she is unable to address him because she was doomed by the gods to never speak first. Voiceless she is left loving without being able to seduce the object of her love. Narcissus is fated to fall in love only once in his lifetime, and that is with his own image reflected. Echo’s ending will be to wither and turn into stone.

It is Echo’s lament that Janneke sings. And in the audience’s hands, one of the stones is Echo herself. The other is Cavillaca. The character of the Peruvian myth has similarities with Echo, as Cavillaca too changed herself into rocks; after being impregnated by a faceless god that turns into a bird and uses a piece of fruit to plant his seed in her. Although coming from different cultures the themes repeat themselves, like an eternal return: the same story relived and retold through the ages, over and over again.

At this point Janneke holds the door while everyone goes through. The sounds – her voice, the stones and the steps – resonate through the corridor until at the end the group reaches another room. Everybody sits either on the wood benches or on the floor while Janneke surrounds them with her voice, now amplified.

But now she is not alone. Now she has three collaborators – participants from the workshop she previously held – and with their help she creates a space of vibration with tonal variations. We continue in almost total darkness except for the little spots of light that come from their lanterns. Her three accomplices make guttural sounds while walking in circles around the audience. In our ears the sounds come near and recede in the distance as each of them passes behind our backs. Everybody is sitting still and there is some tension in the room. As time goes by and the sounds are sustained and repeated a kind of collective trance is created. By now, some people continue to clap the stones, a bit softer, some rub them together creating a calm and spaced sound texture. And as in every trance we are about to get deeper. Janneke’s voice changes from melodic to high pitched, to screaming, to untamed, the words disappear in the sound, she is now communicating raw emotion.

This is the death of Echo, but each person’s personal mythology enters the story. This is my crazy mother losing control repeatedly, this is the last woman I loved deformed by pain raging in front of my surprised face, this is every moment of loss I was not able to cry, every repetition of my life I wasn’t yet able to break. Janneke’s intensity is so provocative that the audience gets uneasy, each one of us trapped through her voice inside our own circular narratives.

We too have turned into stone so many times.

It is the unease of this consciousness that we feel here. And exactly because it is chaos – the chaos of nature, the chaos of life – that is being brought to the surface, some people choose to leave the room to have a smoke.

Janneke modulates her breath, taking her voice to unexpected extremes, sculpting the air with it, giving it different textures, inhabiting vocally every empty space. At this point, she sits down near the group and starts to draw circles on the floor with one of the microphones. The scratching sound introduces yet another layer of sound. A boy looks at her, breathless, with his face half lit by her lantern, and he sees himself. He shakes his head – perhaps to get out of that vision – and closing his eyes restarts rubbing the stones with added strength. Right there, at that moment, they are united.

It is the actual force of nature that we were given to experience here, human senses and all four elements included, coexisting in the same space; the stones being earthly, the voices resounding in space conducted by air, the bowl still filled with water, now cold, and the fire present in Janneke’s fiery vocal chords and in her red hair.

When we reached the end there was light again. We looked at each other’s disturbed faces. The boy that came to the bar before the performance, returns and asks for a beer. “How was it?” I ask. He sighs. “It was incredible.” “So now you are looking backwards.” I say. “Yes”, he laughs, “Now I will be looking backwards.”

Like the cycles in nature, trance itself, that microphone circling on the floor, repetition, alpha and omega, the performance ended but Janneke van der Putten will certainly return. And when that happens we are going to be right next to her to begin again. 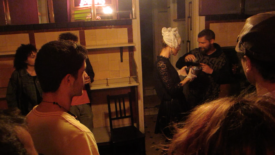