Invisible Architecture in a tower

‘Invisible Architecture’ is a research of Chrs Galarreta and Janneke van der Putten, highlighting acoustic phenomena hidden in a space. In the first version of this project, subtle acoustic phenomena of a light-tower were explored through its surrounding sounds and the acoustic reflections of the human voice. Resonant frequencies and reverberations were emphasized and prolonged with the interaction of the human voice and the echo, making recordings with unconventional microphone techniques. In the compositions and during the live performance, the intention was to make the acoustic reflections audible, more than the sound sources (the voice and surrounding sounds) that exited them. The tone modulations, breathing voice rhythm, and position and type of microphones used, were chosen in response to the qualities of the chosen site. From these variables drones, overtones and other acoustic phenomena appeared in the space.

This project was developed during an artist-in-residency at the Castle, Centre international d’art et du paysage, Île de Vassivière (France, 2013). It was realized with an acoustic voice (by Janneke van der Putten) and a wire used as inter-communicator between the singer and the composer (Chrs Galarreta). Some works resulting from this experience have been published on vinyl and cassette. 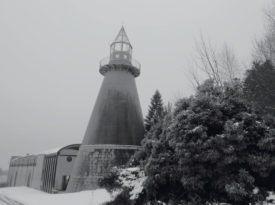 > Publications include 12 Inch LP 180 Gram Vinyl Record, edition of 300, label Aloardi and C30 cassette chrome, edition of 100, label Barreuh and Aloardi
> Composed by Galarreta between November 2013 and January 2014 in Île de Vassivière and The Hague, The Netherlands
> Supported by the Mondriaan Fund
> Download the portfolio of ‘Invisible Architecture’
> Reviews
> Poetic text
> Installation