The Playground In Re-Turn

“This place. I used to be afraid of its echo. It is here I grew up, once. Now, how does it sound in here? A local told me she saw a man walking with a cowbell, clapping around and jamming with a stick. Called the police. After all these troubles with youth from the Diamant neighbourhood.”

‘The Playground In Re-Turn’ is the closing event after a month of listening, observing and intervening in one of the city’s special sites. It is a waiting place. By standing still, it guatters, amplifies and welcomes. Mostly dogs. Less children. Now and then a midnight jogger. It is a landscape with sounds. Wind, birds, people. A natural happening. Different maps. 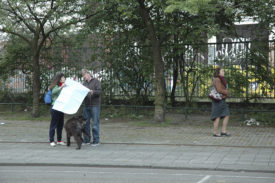