Invisible Architecture in a wasteland

In this version of ‘Invisible Architecture’ Galarreta and Van der Putten guided the audience outside the building of the art space –DordtYart in Dordrecht (Netherlands, 2015), with the intention to realize a site-specific intervention. The artists demonstrated how buildings and the landscape around a wasteland can be used as acoustic instruments. This performative action had a duration of around 17 minutes, and took place between the ruins of a concrete dock, and a small building that had the shape of a cube. The artists used simple percussive tools, releasing subtle echoes in the landscape. The perception of the sound effects was determined by the position of the listeners and the sound sources, in relation to the buildings and the landscape. In order to better perceive the different acoustics it was important that the listeners walked slowly around the performers and the buildings. In this way the audience could create their own composition.

A similar experience was realized in an underpass at the Lohseparc in Cologne, during the artist-in-residence of the project ‘Invisible Architecture’ at Raumklänge – Ortsbezogene Musik (residency previously mentioned). 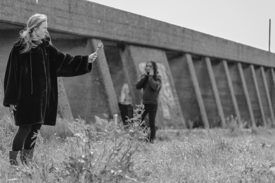