1) What is your background as an artist?
My artistic work was always influenced by my life style; during my time at the textile design department in the Gerrit Rietveld Academie, I lived in a former elderly house and had a room as big as the cafeteria of Theater Dakota. Here I used to divide the space with curtains and fabrics, making changeable compartments.

Although I am fascinated by the structure and repetitive gestures within textile techniques, such as knitting and weaving, producing (enveloping) surfaces and mapping traces and stories of worn clothes, used walls or other textures didn’t give me the physical momentum and joy as in singing. I started to explore the sound world more and feed my love for the voice. But the musicians’ discipline in a daily practice is quite a contrast to the way of working in art school. As teenager my music teacher said I should learn piano over the summer in order to follow his classes. Was the vocal instrument alone not sufficient? So I continued with fine art, as I occupied myself with drawing and poetry. That’s how I departed into the arts, with an urge to create, develop and discover what the world brings.

2) What is your preferred medium with which to work?
I like to collect objects, experiences, or skills, and to document them. In 2007 I was interviewing farmers and in that period I craved for sound recording equipment that could provide me with sonic material for a radio play. I got a mini disc player (how nostalgic) that allowed me to record interviews and re-use sounds around me. I then also started to record my own improvisations and began with street performances and open mics in San Francisco, which is the best place to go into the open of new domains, I believe. I left the knitting for the singing and I think this was a good thing to do. I gave myself this challenge and although the voice is vulnerable, I prefer to let the most difficult go through the throat.

3) The element of ‘space’ is an important aspect to how your work is perceived. Can you explain a little bit about how you work with space and what it brings to the piece.
Swallowing experiences and digesting that what surrounds me is essential in order to feel ‘home’. As an artist I want to engage with what I have at hand, but I don’t have a predefined goal with it. My aim is to adapt and place myself in my environment. Beginning with a project, I don’t maintain a vision of a product; the work evolves as in an assemblage. Here I find a construction, fitting to the specific conditions of the site where the work is presented. If I don’t involve the site, I can’t relate to the how and where of the work. It should be placed somewhere, right? That somewhere has to be part of the work’s narrative (as my friend Rory Pilgrim says) it has to be embedded in the making process. How is the communication with the audience and the presentation of the work, a part of the work’s script?

I am thinking of making a portable work, that isn’t bounded to a certain space or institution. Then the portable medium defines the circumstances, and questions how it situates itself in the environment of the ‘user’, as in the listener or viewer. One can also think of the LP or CD format to allude to a sound installation or participatory event in the informal living room of the ‘user’. But when I am commissioned to make a work in a specific (public) space, I depart from my investigation in the area and its unique architectural and choreographical features. The spatial body of the space is like my band; as I employ my vocal body, ranging from simply breathing to singing, I prefer to respond as much as possible and needed to other present players: the space’s acoustics, infrastructure and context give me a hand in understanding how the work composes itself. How does the work become it-self? The work’s nature is already there, and it is exiting for me as artist, to find it. I hope that my pieces, although maybe evoking displacement and disorientation, give a sense of being rooted and belonging to where they are. In the belonging somewhere, I want them to embody the context of the presentation and implicitly react to it.

4) Can you tell us a story about the piece presented at HH8.
When Kate invited me for the Handmade Homegrown Edition 8, I explored the theater space where I would perform, but this time my enthusiasm for its varied acoustics won’t be outsourced. Because I developed the work, starting with the concert program. I was really happy with its description: ‘The works offer a meditation on landscape and memory, with evocative sonorities and innovatory harmonies.’ I decided to make a piece dealing with tonalities and small differences between tones, as I just had worked with quarter tones in doing the vocal material for Iranian composer Siavash Akhlaghi’s new work (to be premiered at the Institute of Sonology in June 2013). Assembling my recordings and texts, I then found the sentence, which I choose as the title, and made a script.

‘The Birds In The Backyard Tell Me When The Sun Rises’ is part of my project ‘All Begins With A’, for my graduation at the Master Artistic Research, here in Den Haag. As a departure point, I took my vocal training and an intriguing vocal exercise in the classical North-Indian Dhrupad tradition, which I have been learning from Amelia Cuni (Berlin) and Marianne Svašek (Rotterdam) since 2009. Here one sings prolonged tones in the lowest register, for a minimum of a half hour and in the /a/ vowel. Preferably this is done on daily basis during the shimmering, preceding the sunrise. Transcribing a few of last month’s recordings, I noticed that I did stay in the register I used to sing when including the accompanying tanpura (four stringed instrument providing the ground tones for the singer): from the lower C to the G. The difference now is that the voice goes to all that is in between these points, and doesn’t take specific tones as immediate reference. It was interesting to hear the slow movements in pitch and realize again that a key is relatively precise. I don’t believe in a pure sound, as the sonic environment will always harmonize with what I do. My sounds are just an affirmation of my presence, within a whole and changing continuum. Even doing this (what I call now) studio practice in the anechoic chamber, the movements of my organs ‘interfere’ with the vocal sound. As I hear it, something never stands on its own. That’s why I dislike the tuning fork that pretends absoluteness exists; it is such a cold thing, where one needs to hit oneself in order to listen.

5) What compels you to work with sound, voice and text?
On the one hand I am fascinated in historicizing and codifying experiences into language and words. On the other hand, grounding the now-moment by listening with the senses is essential to respond and be situated. I find the score an interesting problem that balances between the immediacy of creating and the reflection of instructing. How can each situation demand a new language to communicate in? The Tower of Babel inspires me: the metaphorical ‘going up’ cannot be served by words; it is a solitary experience that cannot be measured. Giving myself a voice and embracing the medium of the human voice in its full potential, gives the possibility to reach something that overcomes abstractions, which is made out of necessity. As the saying goes: nature is not in need.

Sound is a mirror to reality, but words, texts and poems can unfold ‘useful’ combinations too: each sign bringing the interpreter a new meaning next to one other sign. Because what is life about? Using text is another way to be surprised, gain insight, and deal with this.

6) The presentation of the score can be seen as an artwork in its own right. What role does the score hold in relation to the live performance and presentation?
In my work I deal with the grounding of the linear, growing nature of things that make things move and transform. This I do through process based methods and strategies conceptualized in relation to a project’s circumstances. Each audience member might pick up another layer of the work. One can be frustrated because of the included complexity and information. But one can also be inspired by an openness of interpreting in its own way as relating to the proposed setting. Although the working material might be generated through a self-referential approach, feeding on preceding actions, the presentation and execution of that which constitutes the work is based on intuition and improvisation. I get out of my own systems by embracing the unconscious quality of spontaneity, the organization of randomness and a kind of ‘new-born presence of the moment’.

But the audience can only partly deal with the past the artist lived with: the score is a complex element that can be presented as context of the work, but less as part of the live performance. Often, I find simultaneous visual and aural input confusing, unless they express parallel actions. Because as I work with text, voice, sound and drawing, all bring up different notions of duration and different time experiences. Last year I made a work that dealt with this rush of trying to keep up with the sound in going through the notations, but it was only possible to read its echo and be in a delay. 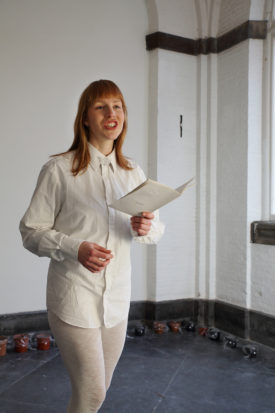