Exhibition ‘Do It With Us’

Exhibition ‘Do It With Us’ presents a programme with three artist-initiatives that share their creative processes in a group or a collective. Aloardi, Filmwerkplaats and misprint-it are examples of platforms that exchange knowledge and ideas by creating alternative learning situations or environments. Through their practices, they contribute to a vital cultural field of artistic experiments and actions such as film, publications, sounds, and workshops.

Inspired by the vitality of encounters and interactions, Aloardi, Filmwerkplaats and misprint-it develop their own tools and methods, contributing to a repertoire of artistic forms brought back into the cultural field. Their performative projects, for instance, often deal with (mis)used analogue and digital technologies. An example of this is reusing trash, hacking the functionality of devices, generating feedback or intervening on found footage.

Looking at the world through an attitude that confronts daily life reality, more than the arts, and using error and failure as a starting point, they play with the status quo that is inspired by their collective spirit. The members and partners of Aloardi, Filmwerkplaats and misprint-it deal with a sense of community in a society that has all the inspiration needed to vitalize that what is already there. 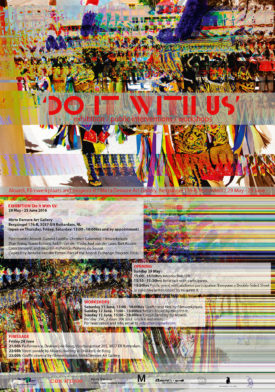