Directed to the Sun

‘Directed to the Sun’ investigates how human rituals relate to specific sites and during moments dedicated to cosmological elements. I consider the sunlight as a fundamental phenomenon. I am interested in the solstice and its effects on the human body. The solstice is a day in the year that posits a point of no return: when time changes direction and the days become shorter or longer. On the solstice of  21 December 2014, I travelled to the sun clock of Chanquillo, and to the desert near Casma, in the North of Lima, Peru. Together with Collective Aloardi we made an intervention in the landscape, by letting the wind resonate with textile objects and my singing voice. I repeated the performance at the coast of Lima, together with the participants of workshop ‘Voice and Space’.

To see the video, see this link. Please use headphones or loudspeakers. 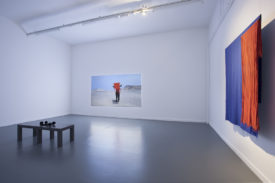 > Project realised during residencies at Asociación Aloardi and Tupac Asociación Cultural, Lima, Peru, 2015. Performed at Chanquillo –site of the oldest sun clock in the Americas, Casma desert, and Barranco beach, Lima. Supported by the Mondriaan Fund.