All Begins With A: inspired by the SUNRISE

My artistic practice is strongly influenced by Dhrupad singing technique. This North-Indian tradition has one singing exercise were low and long notes are sung by articulating the vowel /a/, often for longer than half an hour. It is a learning process in which physical breathing and voice control are used to observe small differences in pitch and sound. I perform these vocal exercises in outside locations during sunrise, for example near my home in Rotterdam or during residencies in Peru or on the French island Vassivière. Getting up for the morning twilight, and the experience of shorter and longer days, informs an awareness of the cyclical nature of time in relation to the Sun, the Earth, and the Moon. 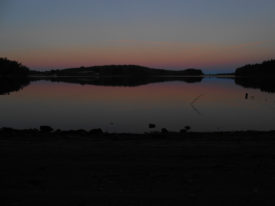 > Made during residencies at Le Château, Centre international d’art et du paysage, Île de Vassivière, France in 2013, and at Asociación Aloardi, and Tupac Asociación Cultural, Lima, Peru in 2014
> Supported by the Mondriaan Fund