CABOTO is a graphic-based live electronics performance for a human being and a set of autonomous agents, or scanners. A graphic score sketched on a canvas is scanned by a computer vision system, interpreted and rendered by an audio synthesizer. The graphic score is a map, traversed by a set of semi-autonomous scanners. The performer tries to keep control over these agents, to exploit their glitches, their failures. The graphic score is projected on the screen, creating a visual feedback of the ongoing process.

Riccardo Marogna is a musician, improviser, sound artist born in Verona (IT), currently based in The Hague (NL). His research is focused on developing an improvisational language in the electro-acoustic scenario, where the electronic manipulations and the acoustic sounds merge seamlessly in the continuum of the sonic gesture. He is active in many projects, playing a range of reed instruments combined with live electronics. He toured in Italy, Germany, Belgium, The Netherlands, France, Switzerland, Poland, United States. His works has been presented at MusLab 2016 – Muestra Internacional de Música Electroacústica (Mexico 2016), Matera Intermedia Festival (Italy, 2017), Colloqui di Informatica Musicale (Biennale Musica, Venice, 2008). He’s currently doing his Master Research Project at the institute of Sonology in The Hague, focusing on optical sound and graphic-based live electronics.

————————–————————–————
JANNEKE VAN DER PUTTEN
Janneke van der Putten will take us on a journey of vocal noise – an intense acoustic performance where she explores a range of vocal sonorities and on-site acoustics.

Janneke van der Putten (Amsterdam, 1985) is a visual artist and vocalist based in Rotterdam. Her practice involves experiences of listening, performances, sound and video, documentations in image/text/textile, workshops, music projects, and creating platforms for cultural exchange. Her voice is her main tool, guiding her through physical and sonic explorations in different landscapes. Engaging with specific sites and local contexts, and through her personal experiences, she investigates (human) responses to her surroundings, and their relation to natural phenomena and transitions, such as the sunrise.

She graduated with a BDes from TXT (Textile), Gerrit Rietveld Academy (Amsterdam, 2003 – 2009) and completed her MMus in Artistic Research, Royal Academy of Art & Royal Conservatoire (The Hague, 2011 – 2013). Van der Putten trained in classical North-Indian Dhrupad singing with Amelia Cuni and Marianne Svašek (Berlin & Rotterdam, 2009 – 2014) and is autodidact in various extended vocal techniques. She is co-curator of the Aloardi Exchange Programme, inviting Peruvian artists to present their work in the Schengen Area (2016 – 2017). The project ‘Invisible Architecture’ with Christian Galarreta, for which they published a vinyl in 2014, has been presented at amongst others exhibition Make the Audition: Meetings Between Art and Sound in Peru, Museo de Arte Contemporáneo (Lima, 2016) and nxnwfestival (Cologne, 2015). She was artist-in-residence at the Centre international d’art et du paysage (Île de Vassivière, 2014), and exhibited with solo shows All Begins With A at TENT (Rotterdam, 2015), Directed to the Sun in Quartier am Hafen (Cologne, 2017) and Quitsa at CINNNAMON (Rotterdam, 2017). Upcoming will be a fellowship at Akademie Schloss Solitude (Stuttgart, 2019).

Jasna Veličković is composer and performer based in Amsterdam. Her works such as Ombre…moi non plus and Shadow Studies focuses on sound extension of traditional instruments. With compositions such as Last Song, Fantasia, Song Without Words, Good Bach she creates a new sound narratives deriving from existing music.

Velicon is Jasna’s most recent performing setup made out of permanent magnets and coils as part of her ongoing artistic research whose aim is the creation of tools that facilitate playing on instruments or objects using the transformative acoustic possibilities of electromagnetic field.

Arma Agharta is the sound performance artist and promoter from Lithuania devoted to improvised and experimental music. Since 2006 he has organized more than a 100 events in Lithuania and did more than 300 performances all around the world: from Brazil to Philippines, from Siberia to California, from Greenland to
Moldova.
His intense and high energy shows span a broad territory between the eruptions of chaotic noise and hypnotic psychedelic ritual to dadaist humour, odd bodily movements, spontaneous improvised games and the voice, detached from meaning and turning into unintelligible glossolalia. In past few years participated in these festivals and special events:
Arctic Sounds (Greenland), Destroy Vancouver (Canada), Gogbot (Netherlands), Sonic (Denmark), Jauna Muzika (Lithuania), Construction (Ukraine), Le mini Who (Netherlands), Mlode Wilki (Poland), 9 Jahre Golden Shop (Germany), Aposition (Russia), Hamselyt (Ukraine), Other Worlds (UK), MEM (Spain), Noise
& Fury (Russia), Sonic Circuits (USA), Experi-Mental (USA), SOTU (Netherlands), Sound Around (Russia).
His music is exclusively released on cassette format in various European labels. 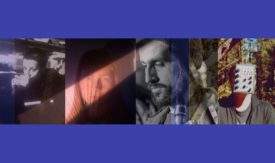