3 November 2017
INTER was developed between the cities of Salvador (BR) and Köln (DE) by João Milet Meirelles and Lia Cunha on the occasion of her artist residency at Quartier Am Hafen | sep-nov 2017. Images and field recordings were collected by Lia Cunha and then processed by João Milet Meirelles to create the compositions. The music zine launch will happen at a performative intervention at une promenade, exhibition by Christiane Rasch at Bruch & Dallas gallery.

Lia Cunha is actual fellow of the residency exchange programme between Quartier am Hafen, Cologne and Goethe-Institute, Vila Sul, Salvador de Bahia, Brazil. The residency is marked by the cooperation with artists from Cologne and their integration within existing collective and longterm-based work processes and exchange on e.g. artists books, walks, interdisciplinary investigations.

Member of the editorial board of Tiragem (EBA-UFBA), a collective publisher with research focused on experimental books and handmade techniques of graphic production. Co-founder of Selo Agricultura Celeste along with the other members of the group TROPICAL SELVAGEM; Co-coordinator of LARGO, a platform for encounters in expanded music and other ways to produce speeches and sensations. The project occupied the Teatro Vila Velha (SSA-BA) in 2016 with bimonthly meetings of free improvisation, new artists invited each edition to develop their research. Selected to Salões Regionais da Bahia in 2009 and 2011. Joined the X and XI Bienais do Recôncavo (2010/2012), awarded Special Mention in its tenth edition. In 2014 participated in Terceira Bienal da Bahia, contemplated with Artistic Residency n Gastateliers der Stadt Frankfurt im Kulturbunker (SECULT BA/ Frankfurt Am Main). facebook.com/dunaeditora/ ; instagram.com/dunaeditora/ ; dunaeditora@gmail.com

JOÃO MILET MEIRELLES
Composer, music producer, live electronics performer and photographer, João Milet Meirelles dedicates to sound and image research with special attention to textures and timbres and their relations with time. Coming from a family of theater artists and with extensive experience in the scene, his work photography, composition, production and musical direction meet and create their own aesthetic body. Work in partnership with DUNA editora – creative environment of the artist Lia Cunha – producing artistic books, zines and musical publications of Infusão (solo project), Beto Junior (free improvisation band).

Since 2010 develop his work in music in live electronics performances with compositions within the “Infusão” (Infusion) project. The project is subject of study in the master course in the university (2016/2017) and in partnership with DUNA made a performance called “Concert for Onitonauts”, an performance for people sleep. It was conceived to the IC festival of performance arts in 2016. Also with DUNA released a single in a LoFi type of record, a kind of vinyl made with low cost meterials and craft. Since 2012 produces and do live electronics in the Baiana System. Band formed in 2009 with extensive curriculum and strong presence in the new Brazilian music scene. In 2011 formed the band Beto Júnior works with free and directed improvisation bringing with this band noise a noisy sound and good mood in the bassoon, guitar and computer.

Along with Beto Junior and Duna idealized and coordinates the LARGO – platform for encounters in expanded music and other ways of producing speeches and sensations. Author of the photographic book Bença released in 2013. Artistic book in collaboration with DUNA, “Sobre os Pés de Quem Anda” (About the feet of thous who walk) in 2017. Since 2004 he has worked as a composer and musician of soundtracks for theater, dance and cinema. With recent award for best soundtrack for the short animation “Entroncamento” 2016 (Igor Souza – Lanterninha Productions) He participated in the Pulso 2016 residence in Redbull Station (São Paulo – Brazil) and the Drift residence in 2016 (Miguel Pereira – Brazil). Training: Graduated in composition by the music school of UFBA (public university) (2004-2009); Audio and Acoustics, IAV (2010); Professional Master degree in Music School of UFBA.

INFUSÃO is a solo project from the composer and live electronic musician João Milet Meirelles. Driven by the art of look and operate in the betweens. Infusão proposes live electronics performance that dialog between compositional materials that are made by improvisations and improvisations with composed materials during previews performances, references and concept. The project is open to flow thru different formats of presentation and collaborations with other artists. Sequences, Patterns, samples, patches are substances ready to infuse in the hot water of possibilities, chances, randomness of free improvisation. It’s a dynamic way of compose and perform that are linked and open. Always in process of being. facebook.com/projetoinfusao/ ; soundcloud.com/joaomiletmeirelles/sets/infusao 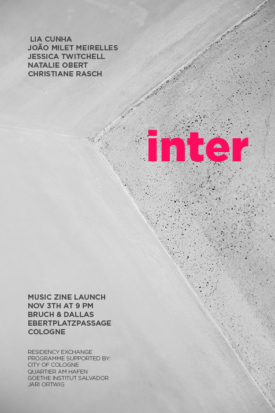